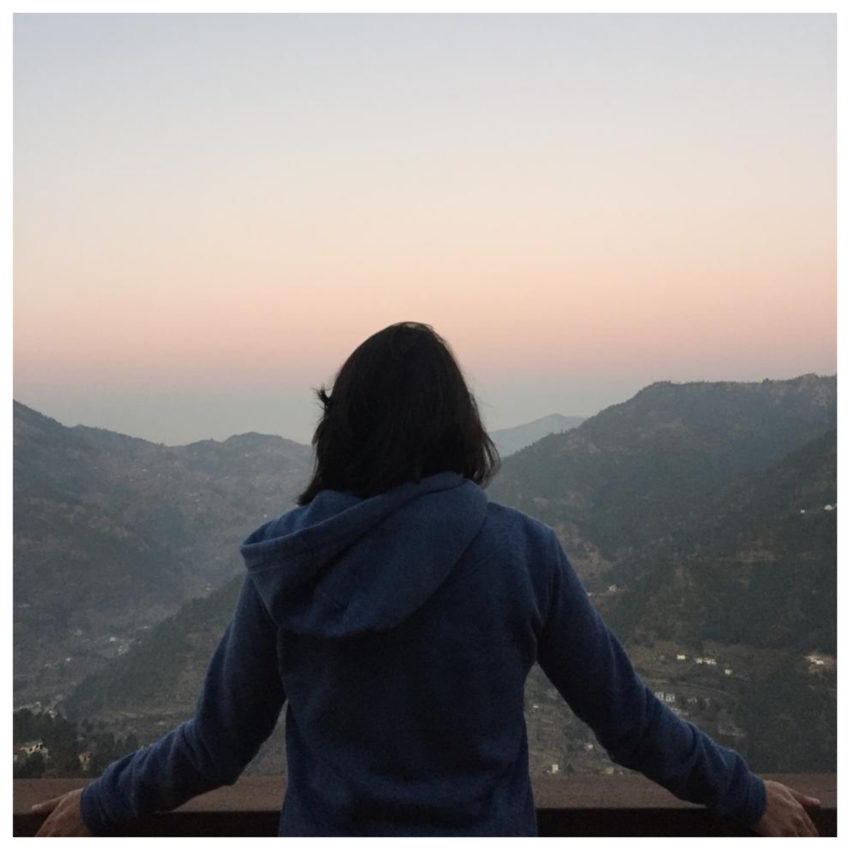 You know the feeling when you’re driving through serpentine roads with the anticipation of reaching the top in your stomach? Your heart beating faster as you look at the rising peaks that make you feel miniscule in the grand scheme of nature, the deep valleys that remind you that life starts here? Well, I do, too and I call it motion sickness.

I’m not a mountain person. In fact, I’m apprehensive about any travel that doesn’t involve a flight. So when I acquiesced to a five-and-a-half hour train ride, followed by an hour-and-a-half car drive from Delhi to Ramgarh, Uttarakhand, I clearly had forgotten the light-headedness, the nausea and the overall feeling of unease that overwhelmes me in the mountains.

However, I don’t regret making the journey.

Off the tourist map, Ramgarh is mostly known as a village on the way to the more popular hill station, Mukteshwar. In this tiny part of Uttarakhand, you will find that time slows down because there’s no race to go anywhere. There is a lack of commercial activities – no shopping or dining out, so your vacation has no itinerary or tourism guide. So yeah, it’s a simple holiday, devoid of all the decision making that comes with the FOMO question, ‘What should we see today?’

Wake up with a bright smile from the sun and begin your day with a pahadon wali chai. Pay your regards to Mother Nature by admiring her beautiful features and spend the days in leisure with one thought in your head: I am happy where I am and I don’t need to move at all. That was what my thought was every morning in Ramgarh.

If Nainital (some 30 kilometres away) is a hub of activity and ‘Grand Hotels’, Ramgarh is the reticent village that keeps to itself. The invisibility cloak on Ramgarh was a stimulus that pushed us to share confidences and discover each other as travellers, as companions, as friends.

Leave the place alone, I say. Don’t whisper this secret in anyone’s ear and let Ramgarh be the aloof village in the mountains that offers far less than Nainital (and so much more).

Things To Do In Ramgarh

It is rumored that Rabindranath Tagore had started writing a part of his famous work, Gitanjali in Ramgarh. He had visited this tiny dot on the Indian map and left a mark. The fans of the writer, as well as nature lovers, take the hour-and-a-half trek from Gagar to Tagore Top to see the panoramic views of the Himalayas. As lovely as it is to see the Nanda Devi from the apex, the unmarked way, which is white with snow in winter months, is beautiful.

Spend A Day In Nainital

North India’s famous hill station is brimming with tourists all year round. The lake sits as the centre of attention here, with lush green mountains standing guard, enveloping the city from all sides. Pick up knick-knacks for home such as shawls and coats, go boating in the placid waters or walk by the lakeside. You can pop into one of the many restaurants here. Pots & Stones is a charming cafe if you’re looking to warm up with a hot cup of chocolate or jasmine tea.

Slightly less popular than its sister town Nainital, Bhimtal is also known for its lake settled in the lap of the mountains. Travellers come here to enjoy the idyllic views and the slow life. Must-visit: The 17th century Bhimeshwar Temple and the nine-cornered lake Naukuchiatal.

Where To Stay In Ramgarh

Homestays and Airbnbs are your best options here. I stayed at a cottage that belonged to a friend’s family friend. On a clear day, I opened my eyes to the vistas of the Himalayas. After stretching my stiff muscles under the morning sun in the balcony, I would have a hot cup of tea keeping my eyes straight on the white snow peaks of Nanda Devi. Later, breakfast would be served on the same table and aloo paranthas and boiled eggs would be a welcomed distraction.

The cottage was an hour and a half drive from Kathgodam railway station. It was perched at the top of a mountain. I had most of my meals hot from the kitchen–the cook’s soups were blessings from above on freezing winter days. But the favourite part of my stay was the night sky from the same balcony, when the mountains faded away in the dark and the stars lined up for a quick hello (you had to be quick because the temperature dropped to -3 degrees).

Find the cottage here and look at other beautiful Airbnb listings in Ramgarh here.

How To Get To Ramgarh, Uttarakhand

I boarded a train at 6am on December 26 from New Delhi Railway Station and I reached Kathgodam at around 11.30am. It is fast and convenient if you don’t want to drive for eight hours (350 kilometres). In a small town such as this, you can’t rely on Ubers, so take a prepaid taxi at the station or ask your host to send a car to pick you up.

2 thoughts on “Have You Ever Been To Ramgarh, Uttarakhand? Please Don’t!”

A travel blog exclusively for women.
Be a responsible traveller and reduce your carbon🦶
Find your next favourite destination here ⬇️

#30DaysofBlues: In Switzerland, an encounter with

#30DaysofBlues: Hawaii is enjoying this pause from

#30DaysofBlues: Ko Phi Phi in Thailand is a travel

#30DaysofBlues: I imagine Robinson Crusoe when I l

#30DaysofBlues: Tourism in the Andamans has picked

Travel For #MentalHealth: In the last post this we

Travel For #MentalHealth: I was exhausted in Decem

The UK has rejected my visa twice. Once even after